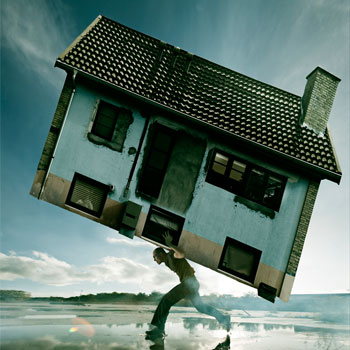 I know where your House is living

“Sometimes fences are necessary, but they do not benefit the neighbourhood. When you put up a wall the other part becomes invisible, and that is a bigger threat than being able to see them.” – David Newman, Professor in Political Geography, Ben-Gurion University

Boundaries are drawn, moved and crossed. In a universe of brown moving boxes, three people are constantly occupied with building, converting, demolishing and moving walls. An echo from our world filled with invisible walls between humans and visible walls of steel and concrete that separate people and nations.

A tribute to the millions of men, women and children who are locked in and hidden behind their dreams of a better life – and a tribute to those of us who have the freedom not to lock ourselves in behind walls of fear…

I know where your House is living is Aaben Dans’s own artistic item in the SWOP Festival Program. Aaben Dans’s Artistic Manager Thomas Eisenhardt and Director Catherine Poher are the creative forces behind this performance that is for the moment touring big time in Denmark and in several European countries.

You can have a sneak peak of the performance right here

“Humanism jumps out of the cardboard boxes when Aaben Dans creates a sensuously rich dance on fear of the strange in ‘I know where your house is living'”
***** Børneteateravisen, Anne Middelboe Christensen

“Thomas Eisenhardt and Catherine Poher creates a new kind of political dance that is neither manifest nor tale. A dance that in its abstract sense creates bodily images of humanism”
***** Børneteateravisen, Anne Middelboe Christensen